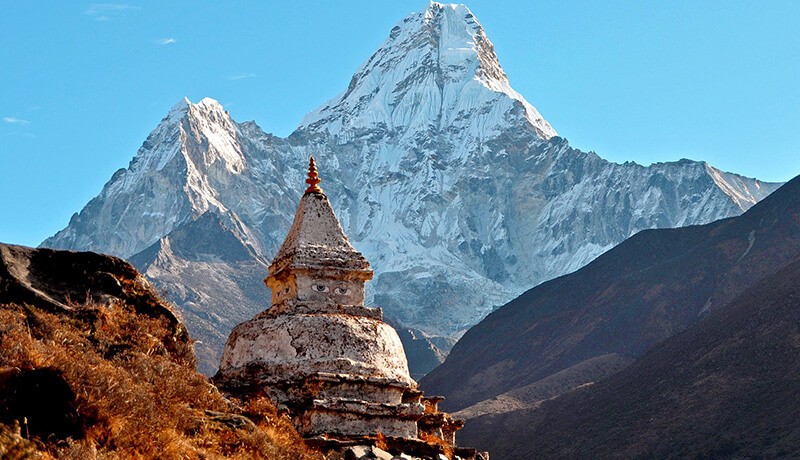 To the south of Mount Everest lies the pyramid-like Mount Ama Dablam. As erect and unmoved as it is, its snowcapped apex passes as one of the most elegant peaks of Nepal. The name “Ama Dablam” emerges from its resemblance to “Dablam,” a sacred ornament box used by local Sherpa women. Mt Ama Dablam is hardly known for its height, which measures roughly at 6,856m (22,494ft). But Ama Dablam’s height doesn’t entirely define the mountain’s glory. The abundance of glaciers, narrow ridges, and rocky mean that the Ama Dablam expedition is not one for the faint-hearted. The Ama Dablam trek offers every astonishing delight in the book. Moreover, its soaring shape and sharp approaches make it an ultimate trekking experience for mountaineers.

In 1961, a team of four mountaineers Barry Bishop, Mike Gill, Wally Romanes, and Mike Ward became the first group to climb the Mt. Ama Dablam peak. The mountain has since then entertained hundreds of expeditions over five decades. Mt Ama Dablam has more to offer than any voyage of varying difficulties and itineraries. The challenge this Ama Dablam trek provides is one of a kind, and enough to leave you mesmerized.

Your journey to the peak, however demanding it may be, is equally rewarding. It invites you to a snowy glory; the sense of accomplishment you breathe is in one word- overwhelming. Up there, it’s a kingdom of steep ice, and you bow to the Ama Dablam’s throne. This glacial kingdom has some rules for its visitors, though. You will need to acquire professional rock and ice climbing training for the 27-day Ama Dablam expedition. Therefore, it is no bluff when we say that climbing Ama Dablam requires technical and mental preparedness. One needs to have grit and guts at the same time to achieve this enormous feat.

You will arrive in Nepal to give the adventure a head start. From Kathmandu, you will be taking an adventurous flight to Lukla.  From there, you’ll trek to Phakding followed by a trek to Namche Bazaar at 3500m.

From Namche Bazaar, the trek up will lead you to famous Tyangboche monasteries (3867m). From there, we will trek to Pangboche (3985m). Following the trails that lead to Mount Everest, you’ll find your feet at Ama Dablam base camp (4400m). Brace yourselves, as it will take you almost 15 days to finish climbing Ama Dablam. The journey is going to be strenuous, exciting, and memorable.

It’s about time that you break all shackles and set out on the quest to the top of Nepal’s “most beautiful mountain.” I’m sure you are excited, restless, and curious. That’s where we come in.

Day 1: Preparation and briefing in Kathmandu

Welcome to Kathmandu, the capital city. Once you get to the hotel, the tour guide will provide a brief orientation on the overall Ama Dablam climbing itinerary. Take note of all the requisites and directions of the trek. Rest/refresh/relax at the hotel in Kathmandu.

Take a flight to Lukla (2840m) from Kathmandu. Get down at Lukla Airport. Acclimatize and start trekking from Lukla to Phakding (2600m). Stay overnight at the lodge in Phakding.

Prepare for a trek to Namche Bazaar after early breakfast. The 4-hour hike from Phakding to Namche Bazaar will get you at 3440m above sea level. After you get to Namche Bazaar, explore around the most happening town of Solukhumbu region. Overnight at the hotel in Namche.

Since you have a day to hit the road again, its best that you get used to the climate and altitude. Acclimatize in Namche Bazaar where you have a ton of things to do. Take a hike up to the Everest View Lodge, which is the highest hotel in the world. Then, visit the Hilary Museum where you get a distinct taste of the Sherpa culture and artifacts dating back to the Edmund Hilary era. Stroll around the Saturday market and stay for the night in Namche.

After a day spent at Namche, a trek to Tyangboche will give you the first glimpse of what’s ahead. The beautifully poised Tyanboche features Tyangboche Monastery and other attractions. Get a hold of the glamorous landscapes as for trek for approximately 4 hours. Acclimatize and overnight in Tyangboche.

Trek from Tyangboche to Pangboche, elevation: 4000m. Upper Pangboche consists of the region’s oldest Buddhist monastery. Rest and prepare for the next day. Stay for the night in a lodge in Pangboche.

Walk to Ama Dablam base camp from Pangboche. Here, you will set up camp for both the ascent and descent. Prepare everything necessary for the trek to the summit. Overnight at the base camp.

Leave for the ascent up to Ama Dablam. Start climbing well-equipped, well-trained, and prepared. It will take you almost 15 days to get to the summit. Stay wary of the avalanche, glaciers, and steep rocks. There will be three camps set up on the way to the Ama Dablam peak. First, get to Camp I. Then hike to Camp II from where the route gets more technical. Once you get to Camp III, go around the hanging glacier, cross the snowy ridges and bergschrunds. Walk slow and careful in the narrow ridges. Follow the instructions to bypass the crevasses. Avoid any obstacles and dangerous paths. Capture the breathtaking Himalayas as seen from the pinnacle. Conquer this extraordinary mountain with a sense of pride. Prepare for a safe descent.

Day 24: Trek back to Tyangboche

Descent from the summit towards Tyangboche 3860m. Explore the rest of Tyangboche before returning. Settle for the night at the camp.

From Tyangboche, get further down to Monjo at 2800m. Monjo lies just below the Sagarmatha National Park. Settle at Monjo.

Get to Lukla. From Lukla, you will head back to Kathmandu the next day, marking the end of the Ama Dablam expedition.

Day 27: Fly back to Kathmandu

Return to Kathmandu via flight from Lukla airport. Rest at the hotel in Kathmandu. Prepare for the final departure.

You might be wondering when the most suitable time for the Ama Dablam expedition is. If you’re an avid trekker, you know by now that spring and autumn are by far the best trek seasons almost anywhere. In Nepal too, spring and autumn have proven to be quite friendly and welcoming to mountaineers. There are fewer surprises when it comes to the climate- it is predictable, stable, and accompanies you all along.

It’s best that you plan this expedition somewhere between March and June as well as later in the year between September and November. The Ama Dablam weather is pleasant and less likely to deteriorate during these months.

The Ama Dablam expedition is a reasonably tough trek, with its difficulty level often described as “extreme.” Of course, the difficulty is sub-par in comparison to the Mount Everest expedition. Still, the Ama Dablam expedition itself demands that you be in an excellent physical condition. The trails aren’t deadly or too risky; it’s just that the ascent can be a bit daring. An experienced mountaineer should be quite alright attempting the Ama Dablam. However, if you’re a beginner to amateur, you will require proper training of steep ice and rock climbing. Out of all, the trek from base camp to Camp I and from there to Camp II, are the difficult milestones. This is mainly due to the intimidating altitude and extreme weather conditions of Ama Dablam. Look out for the Ama Dablam avalanches, which occur from time to time in the region.