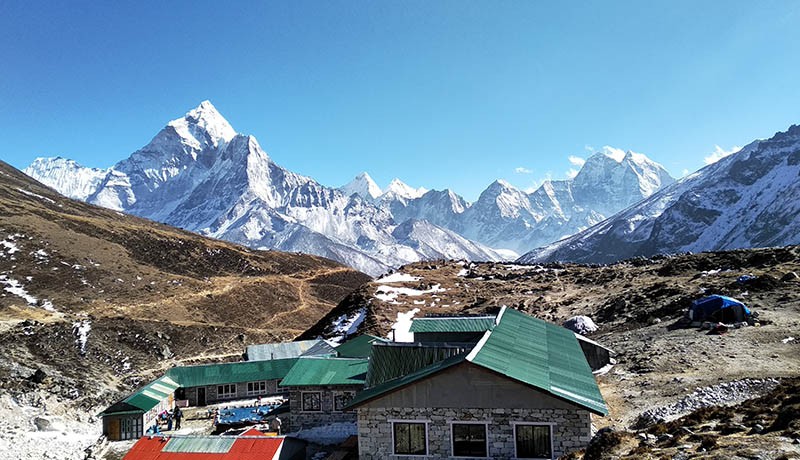 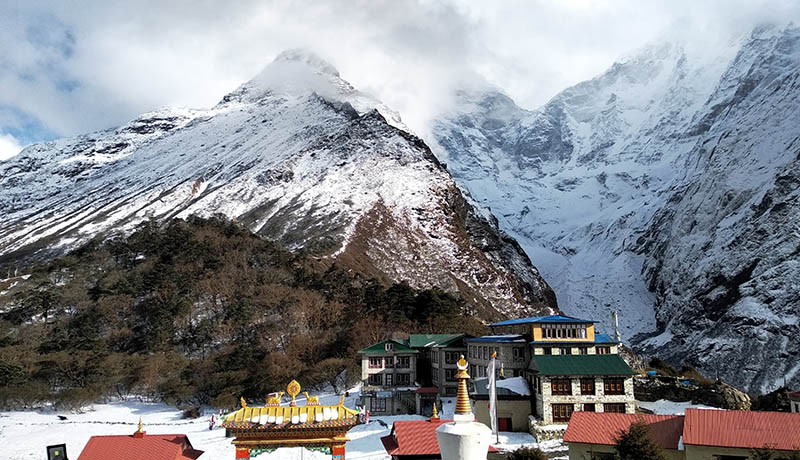 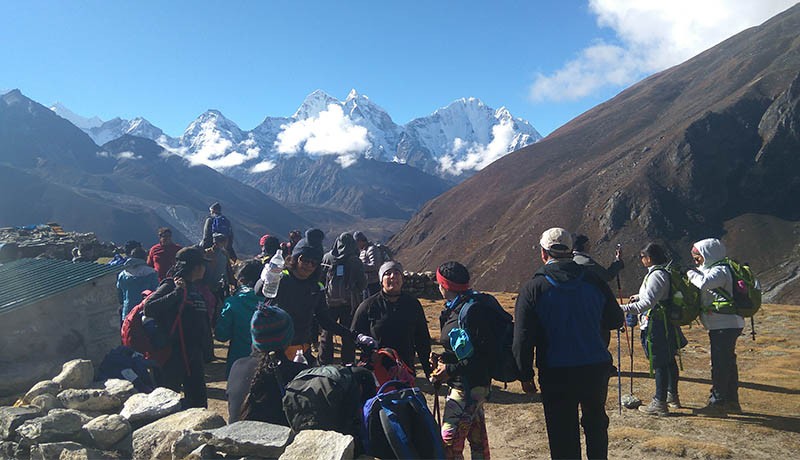 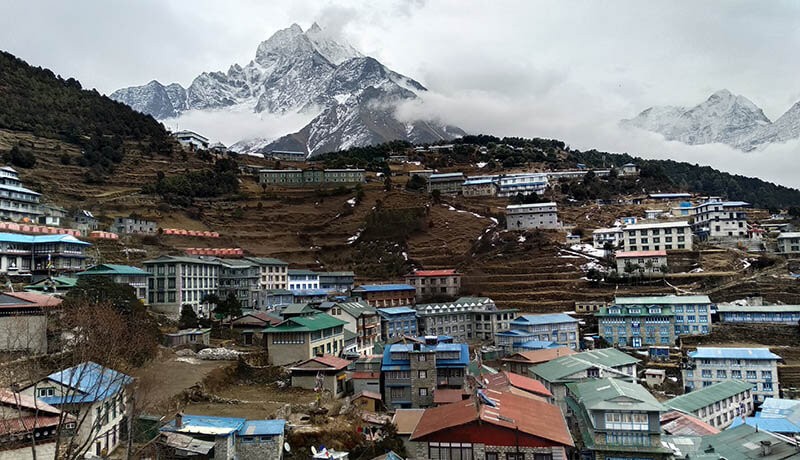 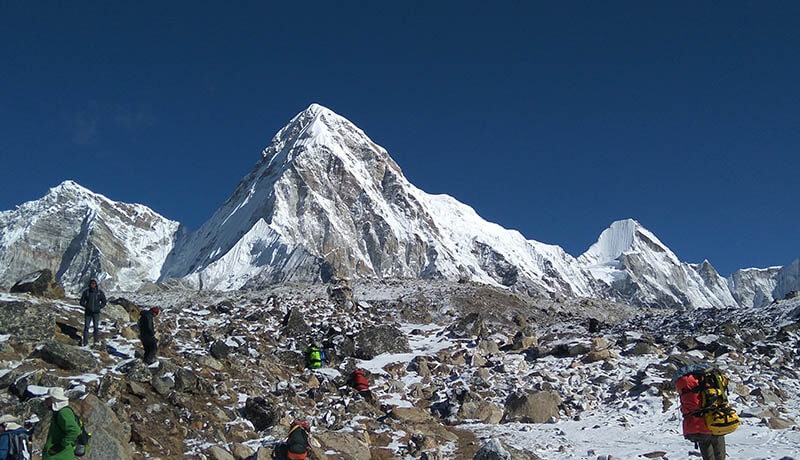 Want to experience an amazing journey in the Himalayan trails of Nepal? Short Everest Base Camp trek, is a complete package of discovering the amazements of the Everest region. This trekking is popular among the keen trekkers from around the world.

The major highlight of this trekking is Mt. Everest, the highest peak in the world standing 8848 meters tall. Along with it, everything you will encounter on the trail will remain as wonderful memories for the rest of your life. Trekking through the rugged Himalayan trails, watching the high snow-capped Himalayas from their proximity, you won’t believe me, but the trek to Everest Base Camp is dreamy.

Sagarmatha National Park, a UNESCO World Heritage site covers most of the trekking. Walking through the genuine trekking trails inside the national park, you are more likely to see the incredible range of floral and faunal species.

The unique culture and traditions of the Sherpas in Everest, you will hardly get to see that elsewhere. The locals in Khumbu are hospitable and cheerful. They live a basic way of life, simple yet so happy.

One thing to keep in mind though is that since this is a shorter version of the conventional Mount Everest Base Camp Trek, there are no acclimatization days. This can increase the chances of catching altitude sickness, so be sure to stay hydrated and ascend slowly. Also if you feel the signs of the altitude sickness kicking in, do not hesitate to inform your guide.

Despite some challenges, you will collect a bundle of memories when you trek to Everest Base Camp. Trekking to EBC is a delightful memory that will stay with you for a lifetime.

We will take an adventurous flight to Lukla from Kathmandu. The flight will land at the Tenzing - Hillary airport. Upon landing, we will start our short trek to Phakding.

The trail moves along the side of the Dudh Kosi valley passing by the settlement of Ghat. After the further ascent, we arrive at phakding where we stay overnight.

After an early breakfast, we start our trek to Namche Bazaar. The trek today starts by crossing the suspension bridge and walking past a scenic waterfall. The majestic Mt. Thamserku appears on our right. We have another bridge to cross, and we arrive at the village of Monjo after some time.

The Sagarmatha National Park starts from here, and there is an entry checkpoint where you have to show your permits. After completing the formalities, we continue our walk towards the Khumbu valley. We have our lunch at Jorsale and continue trekking in the up and down the trail.

We cross several bridges and follow the trail on the banks of the Dudh Koshi river. We gradually climb towards Namche Bazaar. Namche Bazaar is the commercial hub of the entire region and is a famous acclimatization point. We stay overnight at a Lodge in Namche.

After breakfast, we gradually make our way on an easy trail. We trek further for one and a half hours, until we arrive at Kyanjuma, from where we get a panoramic view of the snow-capped mountains.

We then enter the alpine forest of rhododendron and pine trees and descend for about 45 minutes along the banks of the Phunki Tenga river. The winding trail arrives at Tengboche after some time.

Tengboche lies just below the Ama Dablam, and the view of the Himalayas is spectacular. There we can find the ancient Tengboche monastery, which is the oldest in the region. We spend the night at a lodge in Tengboche.

After breakfast, we continue our trek along with the alpine forests of rhododendron and fir trees. We cross a wooden bridge and arrive at Pangboche gate after ascending for about 30 minutes.

We continue our trek to Syomare, where we have our lunch. The trail becomes wide and opens up. We arrive at Dingboche after a trail of almost 3 hours where we stay overnight at a lodge.

After an early breakfast, we start our trek of the day to Lobuche. We have a steep ascent ahead of us until we arrive at the stupa. From the stupa, we can observe the fantastic view Everest, Makalu, Amadablam, and other mountains.

The trail turns smoother then onwards, and after trekking for almost 2-2.5 hours, we arrive at Thukla. We climb up a steep ridge where we can find the Memorial Chorten of the mountaineers who lost their lives in the Mt. Everest expedition.

We pay our respects and continue our trek to Lobuche in a level trail. We stay overnight at a lodge in Lobuche.

After having breakfast, we leave Lobuche for Gorak Shep. We ascent steeply up the Lobuche Pass and observe the serene Khumbu glacier. We then continue our trek along rocky terrain. There is an Italian research center along the trail before we arrive at Gorak Shep.

Gorak Shep is a frozen lake bed and also the original base camp of Mt. Everest where Sir Edmund Hillary and Tenzing Norgay set up their camps. We use the new moraine route for hiking towards the Everest Base Camp. We can observe the breathtaking views of Everest, Pumori, Nuptse, and other mountains from the base camp.

The environment around the Everest Base Camp is bustling with climbers and trekkers. After clicking some pictures and relishing the scenery we descend back to Gorak Shep in the afternoon and stay overnight at the Lodge.

Day 7: Trek to Kala Patthar and back to Pheriche (Himalayan)

We have to start trekking in the wee hours of the morning to be able to observe the awe-inspiring sunrise from Kalapatthar. The glorious sunrise in the backdrop of the entire Mt. Everest range is a once in a lifetime experience.

The view of the snow-capped mountains, including Mt. Everest, Ama Dablam, Taboche, Lhotse, Nuptse, Pumori, Cholatse, and others is surreal. After that rewarding experience, we descend back to Gorak Shep to have our breakfast.

We have a sumptuous breakfast and then trek down to Pheriche. We will spend the night at a lodge in Pheriche.

After an early breakfast, we start our trek from Pheriche to Pangboche. We then descend towards the Imjatse River and cross a bridge and ascent for an hour to arrive at the Tengboche Monastery.

The aesthetically pleasing monastery at Tengboche is one of the oldest in the region. The trail makes way downhill to Phunki Tenga, and after a trek of almost an hour, we arrive at Kyanjinma.

Kyanjima is a distinctive, pleasant landmark on route to Namche from where we can observe the spectacular views of snow-capped mountains including Everest, Ama Dablam and Thamserku, and other peaks. After a trek of some time, we arrive at Namche where we spend the night.

We start our descend early along the same route we took earlier. The route may be the same, but we have a new perspective of the region. We pass by the beautiful village of Phakding and make our way to Lukla. We stay overnight at a lodge in Lukla.

Day 10: Flight from Lukla to Kathmandu

After a beautiful experience in the tiny Himalayan nation, our trip comes to an official end. We take the scenic mountain flight back to Kathmandu from Lukla.

The adventure flight takes around 30 minutes, and you can observe the beautiful views of the snow-capped mountains for one last time.

The total walking distance of the short Everest Base Camp trek comes around 130kms commencing from Lukla. Since we will be skipping the acclimatization days, the average walking distance per day will be around 13kms which will take 5-7 hours depending on the occasional stops.

From Phakding, you will be walking to the heart of Khumbu, Namche Bazaar. On the way, you will be passing through some beautiful villages like Monjo and Jhorsale. This is the day when you enter the Sagarmatha National Park and get your permits checked. Overnight in Namche.

From Namche, the trail goes upwards to Tengboche monastery. On this day, you will discover astonishing views of Mt. Thamserku, Ama Dablam, Lhotse, and Mt. Everest in the backdrop. There are a few teahouses in Tengboche where you can stay overnight. From Tengboche, the trail makes up to Dingboche via beautiful villages like Pangboche and Somarey.

From Dingboche, the trail passes through amazing mountain scenarios and interesting trails to Lobuche. Lobuche is a small village at the feet of the stunning Lobuche peak. Be sure to stay hydrated and walk patiently throughout the trail.

From Lobuche, you will trek further to Gorak Shep, the last village and then to the Everest Base Camp. After visiting the base camp, you will retrace the trail back to Gorak Shep and will sleep there.

The next day is about hiking to Kalapathar, the most popular viewpoint of Everest. The early morning hike and the enchanting sunrise view at Kalapathar are remarkable. From there, you will return to Gorak Shep and will trek back to Phakding village. Retracing the amazing trekking trails, you will walk back to Namche to Lukla, and will fly to Kathmandu.

The short Everest base camp trek is 10 days trekking. Trust me, you will love everything about these 10 days. Grab the memories here and cherish them for a lifetime!

As soon as you have Everest base camp trekking in your mind, you should know that this trek is a remote trek. Though the trekking trails and the villages are remote, there are well-facilitated teahouses and lodges. It is obvious that you will not find five-star hotels, but for the remoteness, the services the teahouses provide are a lot more.

The food menus consist of some local as well as international cuisines. Trying local food is always recommended. While trekking in Everest, you will be having meals three times a day at the teahouses and lodges.

Note: Food and accommodation become more basic as you go up to the higher altitudes. This is due to the remoteness of the place that increases with altitude.

The major difficulty during short Everest base camp trekking is due to the altitude. Most of the trekkers fear to suffer from altitude sickness. But, with proper plans, preparations, and cautions, altitude sickness shall not be the major difficulty.
Weather and temperature at the high altitude Himalayan region of Nepal. So, it is always necessary that you pack adequate gear for your trek. Also, it is necessary that you keep informed about the weather and temperature prevailing in the region before you go. Look if there are any weather alerts before you start off.
Trekking in the rugged and remote trails can be challenging for beginners. So, to keep away from it you can do some hikes near your place, do some exercise, and training as EBC trek preparation.

Best Time for the Short Everest Base Camp Trek

Autumn (September to November) and Spring (March to May) are the most popular time for Everest base camp trekking. During these times, the weather and temperature in the Khumbu region remain stable and favorable for trekking. Also, the atmosphere remains clean. You will see the splendid Himalayan views. Trekking in the best time means you will have a comfortable as well as a wonderful time with nature.

Due to the proximity to the mountains, the Everest range has ever-changing and unpredictable weather. The temperatures are usually warm during the day at the favorable seasons but drop drastically during the night, especially at higher elevated areas.