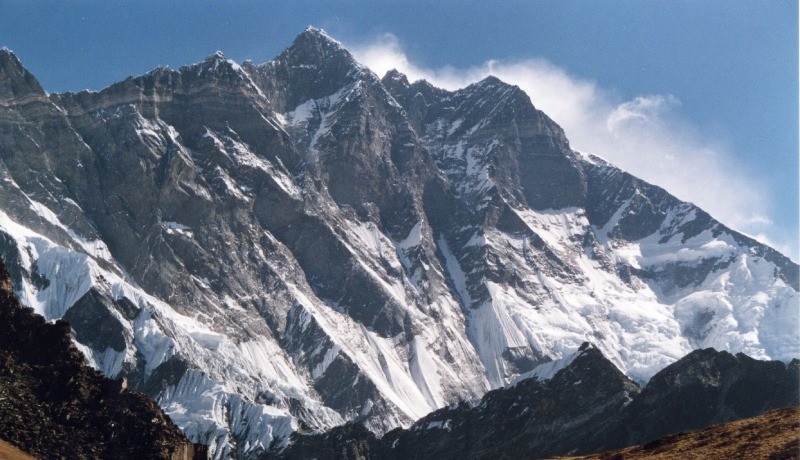 Lhotse, at 8,516m (27,940ft) comes in as the 4th highest mountain in the world after Mount Everest, K2, and Kanchenjunga. Lhotse is connected to Everest by the South Col (a sharp-edged notch or pass that connects Everest and Lhotse) located on the west face of Lhotse. Col is an abbreviation of the French word couloir meaning a steep, narrow gully on a mountainside. This happens to be the most difficult and challenging part of the ascent to the summit. Its exposure to the elements and high winds usually ensures it is free of a build-up of snow. The South Col’s altitude never drops below 8000m and is also referred to as the “Death Zone”, due to the threat of altitude sickness. This is usually the main cause of failed attempts on the summit. Lhotse’s South Face rises steeply, making it the steepest mountain face in the world, and added to this is what is referred to as Yellow Band, an area of sandstone rock where crampons become less effective. Another challenge is the Geneva Spur, a large rock structure near the summits of Everest and Lhotse situated above Camp III and the Yellow Band, before Camp IV and South Col. It is obstacles like these that test the endurance and skills of even the most seasoned mountaineers, and often leads to a failed attempt at the summit.

Day 10: Trek to Everest Base Camp

Day 39: Cleaning Up Base Camp

Day 40: Trek Back to Pheriche