9 Days Everest Base Camp Trek and Fly Back by Helicopter 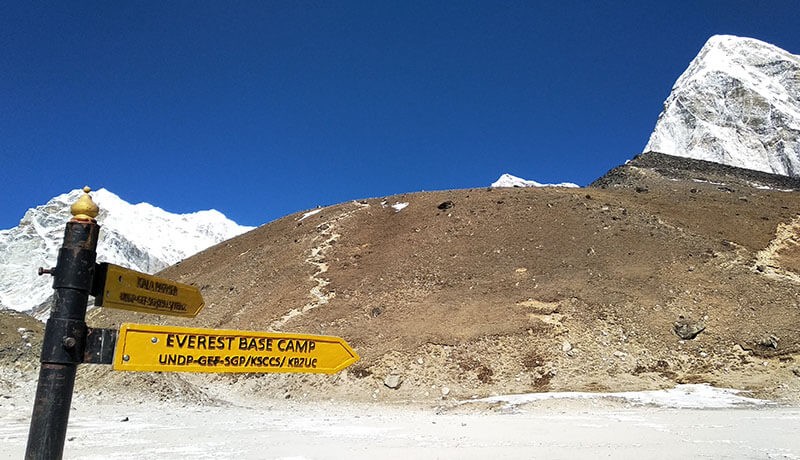 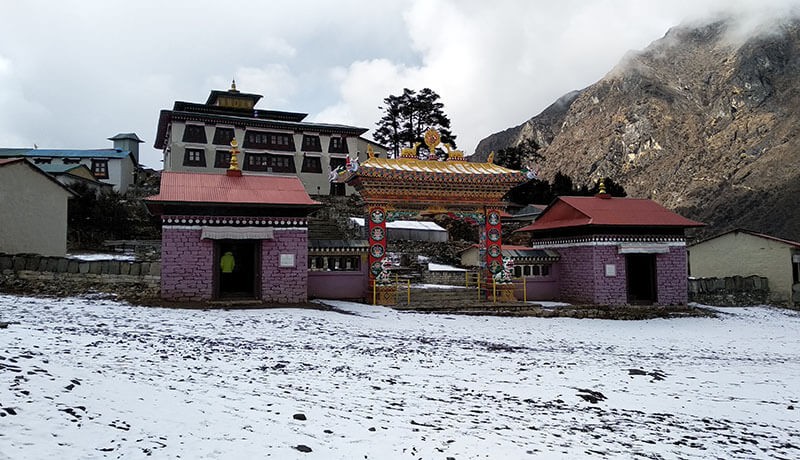 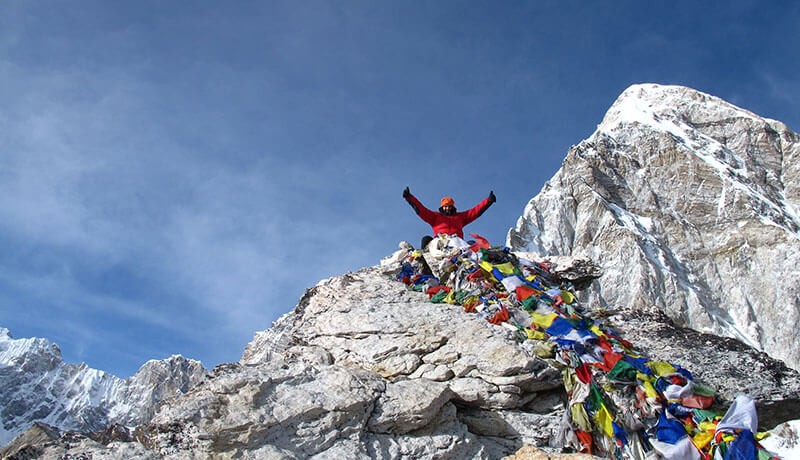 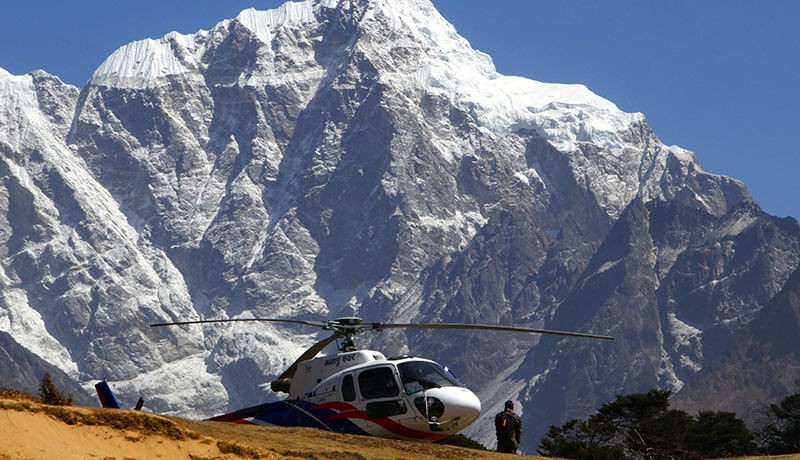 Everest Base Camp Trek & Fly back by Helicopter 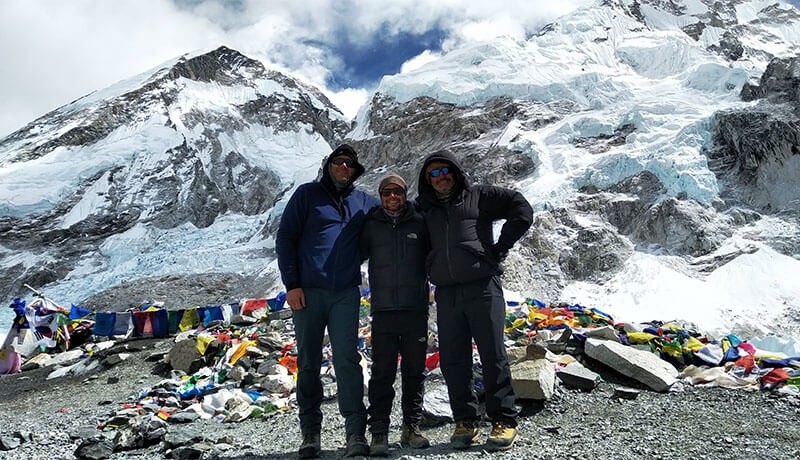 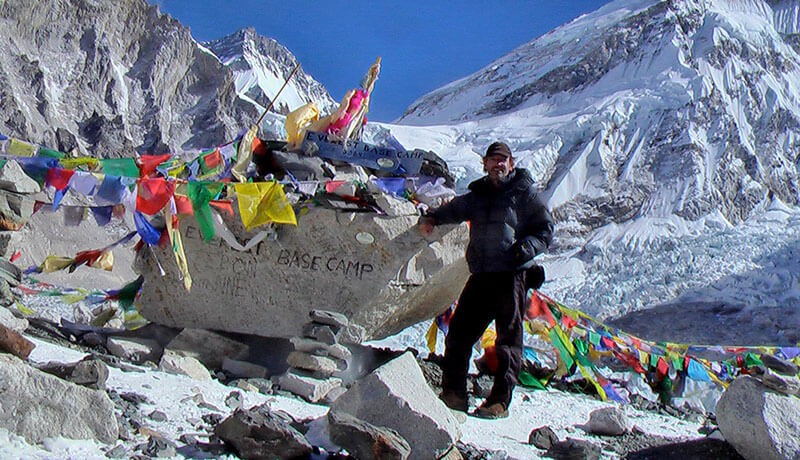 EBC Trek to Top of the World 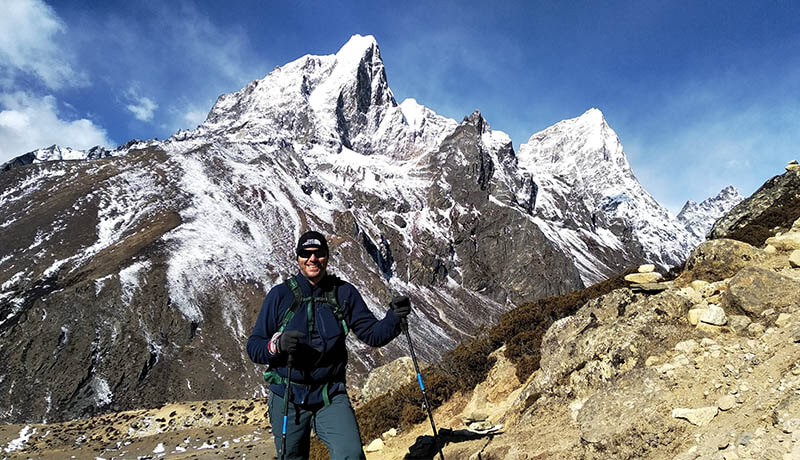 The Everest Base Camp trek takes you on a voyage to the foot of the world’s highest peak loaded with delightful highlights of the Khumbu Region. Passing through the hypnotizing waterway valleys, the trek blesses you with the magnificent scenery of the verdant landscapes, glacial lakes, and the panoramic snow-capped mountains.

The Everest Base Camp Trek with Helicopter Return is an alternative option of the conventional EBC trek. Here, you hike all the way to the base camp and return via helicopter. It is perfect for people with a limited amount of time or individuals looking to avoid long days of strenuous descent.

On this 8-day journey, you get to witness the majestic Mt Everest up close, which is an unforgettable experience in itself! You also get an outlook on the culture and lifestyle of the local sherpas. The Buddhist religious communities of the Khumbu region also contributes to numerous monasteries, each soaked with rich cultural heritage.

The journey to the base camp of the world's tallest mountain is a courageous trek bundle that incorporates ascending through lush rhododendron forests and steep moraines all while appreciating the encompassing perspectives of Mt. Everest and the surrounding Himalayas. Nothing beats the rush and feeling of achievement upon conquering the foot of the mighty Everest!

So what are you waiting for? Grab your bags and sign up for this Everest Base Camp Trek with Helicopter Return to experience an adventure of a lifetime!

The journey commences with a 30-minute thrilling flight to Lukla airstrip. The trek then begins at Lukla in the south and travels north to Namche Bazaar. The trail further winds towards the north-east and advances toward Dingboche. From that point, it proceeds through the settlements of Lobuche to the beautiful lands of Gorak Shep.

The Everest Base Camp is marginally further east from Gorak Shep and provides a jaw-dropping up-close view of the mighty Everest and its neighboring giants.

On our journey, we also visit Kala Pattar, which is well-famed for its 360-degree panoramic view of the Mahalangur Himalayan Range. The trip concludes with a thrilling helicopter flight from Gorak Shep back to Kathmandu.

The EBC trek has earned its position among the world's best treks, and it rightfully deserves to be so! Despite some challenges, the Everest Base Camp Trek with Helicopter Return is unquestionably an adventure worth doing! This journey to the base camp of Everest alongside the magnificent landscapes, glazing lakes, and surrounding icy peaks is going to fill your pockets with unforgettable memories!

Day 1: Fly from Kathmandu to Lukla and Trek to Phakding

The journey commences with an early morning 30-minute flight from Kathmandu to Lukla (2860m). The short and scenic flight exhibits excellent pictures of the mountain peaks.

From Lukla, we advance toward Phakding, a lovely settlement perched at the edge of the Dudh Koshi River Valley. En route, you can witness the magnificent Kusum Kanguru Peak in the backdrop. The journey takes about 3 hours along relatively comfortable trails. Overnight stay at Phakding.

We start the trek by ascending above the Dudh Koshi valley. The trail experiences few suspension bridges spanning from one slope to another. Following 2 hours of lovely walk, we arrive at Sagarmatha National Park entrance in Monjo. We need to display our TIMS permits to the officials for entering the Sagarmatha Conservation Area.

We further continue our way on the trail as we pass through thick rhododendron and pine forests until we reach Jorsale and stop for lunch. After crossing the Hillary Suspension bridge, a continuous tough climb leads to the famous town of Namche Baazar.

We take a rest day at Namche to allow your bodies to get acclimatized to the altitude and climate. There are numerous areas to explore around Namche. For adventure seekers, you can hike up to the Syanboche airport, which is an hour and a half hike from Namche. Similarly, you can also visit the Everest view hotel, which provides breathtaking views of the snow-clad mountains.

On the fourth day, we follow an uphill leisure path towards the Tengboche village. The trail is a comfortable ascend as we pass through the rhododendron-loaded forests and emerald pastures. The trail follows alongside the Imja Khola river.

En route, we can observe the magnificent views of the Mahalangur pinnacles, namely Ama Dablam and Mt Everest. We also visit the ancient Tengboche Monastery, which lies on the lap of sacred Khumbila once when we arrive at the village. Overnight stay at Tengboche.

We start the trek by climbing over the Imja Khola, as we pass through numerous suspension bridges. Along the route, we pass through the light settlements of Pangboche and Orsho. The trail consists of frequent Mani stones inscribed with scribblings of the Buddhist prayers.

After coming to Dingboche, broadly alluded to as "the late spring valley" of the area, you can unwind and enjoy the marvelous perspectives of the Everest crests that overshadow the village drastically. Overnight stay at Dingboche.

We save this day for acclimatization! Since we are above the 4000 marks, we need to get acclimatized to the high altitude to push for the base camp trek. To make the day more productive, we climb up the Nagerjun Hill, which is close to Dingboche.

The climb is a moderately strenuous one, however the fantastic views of the rambling Imja valley seen from the top merits the exertion of the climb! The top also provides exquisite views of the surrounding mountains, namely Ama Dablam, Lhotse, Nuptse, and Everest. After spending some quality time at the top, we descend back to Dingboche to spend the night.

Our destination for the day is a small settlement of Lobuche which brings us a step closer to the colossal Mt Everest. The landscape contrasts from lavish woods to scantily specked bushes along the way.

After 4-5 hours of continuous walking along with the pasture lands, we finally reach Lobuche. Massive Lobuche peaks overshadow the little settlements of Lobuche. Enroute, you can get magnificent views of the towering Khumbutse Himalayan peaks. Overnight stay at Lobuche.

Today is the main highlight of the whole trip where we will be setting foot on the base of the world’s highest peak. We start early and advance towards Gorak Shep, which is the last settlement before the base camp.

Gorak Shep is a sparsely populated settlement that locals used as a base campground before they constructed the base camp. We continue walking along the Khumbu glacier, making our way towards the base camp.

After some hours of continuous walking, you finally reach the Everest Base Camp (5380m). Here you can witness Mt Everest directly in front of you, standing in all its glory! After some well-deserved photographs, we make our way back to Gorak Shep where we will be staying the night.

Day 9: Trek to Kalapathar and Trek down to Gorekshep. Pick up by Private Helicopter and Fly back to Kathmandu

On the final day of your journey, we take an early morning hike to Kalpattar. Kalapattar allows us to witness the magnificent sight of the sunrise gleaming out of the snow-clad mountains. Kalapattar provides a marvelous 360-degree panoramic view of the entire Mount Everest massif.

After spending some quality time in Kala Pattar, we descend back down to Gorak Shep. We then board the chopper for our flight back to Kathmandu, concluding the 8-day trip.

You can bid farewell to the fading mountains in the backdrop, reminiscing all your joyful experiences during the trek.

Best Season For The Everest Base Camp Trek with Helicopter Return

Due to Lukla’s proximity with the Himalayas, the weather here is very unpredictable. Bad weather can easily disrupt your trek and abrupt your joyous experience. Thus it is vital to choose the seasons when opting for the Everest Base Camp Trek.

The best months to opt for the Everest base camp are spring and autumn seasons.
Pre-monsoon seasons such as February, March, April, and May are an excellent option for the EBC tour. The skies are more evident, and the vegetation is in full bloom. The good weather also provides no obstruction in the returning helicopter flight.

Another ideat time for the EBC tour would be the post-monsoon season. It starts from Late September and ends in December. With the ending of the monsoon season, the mountains are fully snow-capped, providing appealing views to the travelers. The skies are also more apparent, and the climate is warmer all contributing to a sublime trekking experience.

Difficulty Of The Everest Base Camp Trek with Helicopter Return

The EBC trek is a moderate level trek. The trek is even feasible for individuals who have no prior trekking experience. The trek includes walking 5-6 hours every day for about 10 kilometers with frequent rest stops.

Be that as it may, with earlier trekking arrangements, the voyage becomes much more comfortable. It is beneficial to set yourself up for the trek around half a month before the start of the experience.

The Everest Base Camp Trek with Helicopter Return is an even more comfortable option than the regular EBC trek. It saves you 3-4 days of descending time. The absence of these few days of trekking further decreases the overall difficulty of the trek.

Highest Point During The Everest Base Camp Trek with Helicopter Return

The highest point you will be venturing during the Everest Base Camp Trek with Helicopter Return is Kala Pattar. It sits at a staggering elevation of 5,643m.