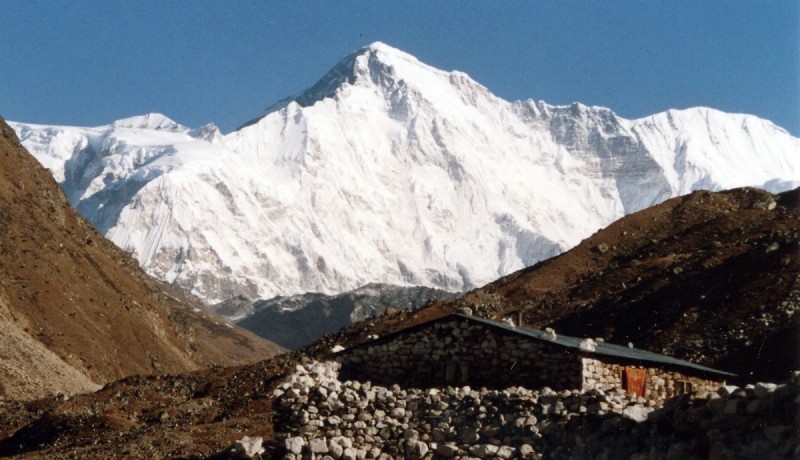 Not exactly a walk in the park, but Cho Oyu (8188m/18,753ft), the 6th highest mountain in the world is claimed to be the easiest of the 8000m peaks to climb. Cho Oyu means "Turquoise Goddess" in Tibetan and is located in the Khumbu Himal, a subsection of the greater Mahalangur Himalayas, and Cho Oyu is just 20 km to the west of Mount Everest. Mahalangur also includes three of the world’s highest peaks: Lhotse, Makalu, and Cho Oyu. Cho Oyo sits right on the Chinese and Nepali border in the northeast of Nepal. Despite Cho Oyo being the easiest of the 8000m plus peaks to climb, it does however still require a high level of high altitude climbing expertise and toughness that comes from previous climbing experience. Like all mountains, it exists to be climbed and enjoyed by adventure seekers.

Only a few kilometers to the west of Cho Oyu lies the Nangpa La Pass (5,716m/18,753 ft) glacier which is the main trading route connecting Tibet and the Khumbu Sherpas of Nepal. This pass lies between the Khumbu and Rolwaling Himalayas. The main reason Cho Oyu is considered easier than other 8000m peaks is due to its more moderate faces as you climb the usual northwest route to the summit. Nevertheless, it still requires planning and logistical support in order to safely reach the summit and alleviate altitude sickness. Preparation is everything, and Mount Mania will leave nothing to chance. They are experts in this field.

A number of base camps will be established at varying altitudes which we will climb up and back in order to better acclimatize. Altitude sickness is probably the main reason many climbers fail to reach the summit. To better acclimatize we have allowed enough time to be better prepared for the higher altitudes.

Mount Mania's Sherpa guides (well known for their climbing skills) will do everything within their power to lead you safely to the summit. Our guides are government certified and experienced climbers. We take no chances with your well-being and hence have allowed several days to make up for unforeseen circumstances, such as adjusting to higher altitudes and the possibility of altitude sickness.

Day 11: Trek to Advance Base camp

Day 38: Drive back from to Thingri