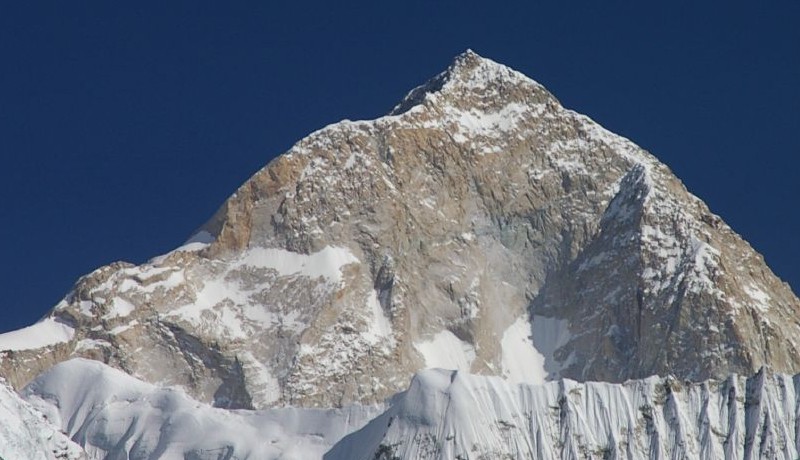 Are you an experienced mountain climber looking for a real challenge? Try Makalu, a four-sided pyramid soaring 8,485m (27,838 ft) in the Mahalangur Himalayas 19 km southeast of Mount Everest in the Makalu Barun National Park. Makalu has two subsidiary peaks. Kangchungtse or Makalu II (7,678 m) about 3 km north-northwest of the main summit and Chomo Lonzo (7804m) that is connected to Kangchungtse by a narrow saddle of 7200m.

Makalu is definitely not a simple climb and is technically difficult and said to be one of the most challenging 8000m plus peaks in the world. You will have to climb some very steep inclines and across razor-sharp ridges that will expose you to the often extreme weather conditions that prevail over this mountain. The last leg of the ascent requires some technical skills as you traverse a rocky terrain. Makalu has never been climbed during winter.

Most climbs traverse the north-western side of the mountain. The base camp is usually established at around 5,600m, with other camps at 6,100m, Camp 2 is at 6600m, the third camp is at 7200m and the last camp is at 7600m.
We have scheduled a few extra days in the itinerary in the event of the weather being unsuitable for climbing. These days are not wasted and will further help you to acclimatize as we camp at several altitudes on the side of the mountain at designated base camps. We will make an early morning start on the day of the climb, allowing ample time to reach the summit. Morning weather is often calmer and more predictable, but we mustn’t forget that “mother nature” makes its own rules.

Climbing Makalu requires you are fit and an experienced climber. It is considered a difficult and challenging climb with snow and ice to traverse along with several technical sections. You should be familiar with the use of crampons, ice axes, harnesses, grappling ropes, and other alpine climbing techniques.

Some climbers recommend a gradual ascent to higher altitudes to avoid altitude sickness. Altitude sickness is most likely the major factor in denying a climb to the summit –and of course a sudden change in the weather.

The best season to climb Makalu is in April or May, in the spring, or in October and November in the fall season. Climbing mountains will teach you patience, persistence, and gratitude. It will also leave you memories to last a lifetime.

Mount Mania's Sherpa guides (well known for their climbing skills) will lead you safely to the summit. Our guides are government certified and experienced climbers. We take no chances with your well-being and hence have allowed several days to make up for unforeseen circumstances, such as adjusting to higher altitudes and the possibility of altitude sickness.

Day 3: Fly to Tumlingtar and Drive to Num

Day 13: Trek to Higher Base Camp

Day 46: Trek to Num and drive to Khadbari

Day 47: Drive to Tumlingtar and Fly to Kathmandu

Mount Makalu is the 5th highest mountain in the world and height of 8463 meters and located in Mahalunger Himalayan range. It is an attractive mountain having the shape of a four-sided pyramid. Makalu is considered one of the most difficult mountains in the world to climb having its steep ice and knife-edged ridges. The final ascent of the summit pyramid involves technical rock climbing. Makalu is the only Nepalese 8,000m peak which has yet to be climbed in winter condition.

The name Makalu is a word from the Sanskrit Maha Kala, a name for the Hindu god Shiva that translates as “Big Black.” The Chinese name for the peak is Makaru.

This tour package doesn't include your personal insurance you should have travel insurance covering emergency evacuation.

The accommodation in a valley and other major cities will be according to your requirements.

You can have Tourist Visa at Tribhuvan International Airport (TIA) on arrival. 'On Arrival' visa procedure is simple and very fast.