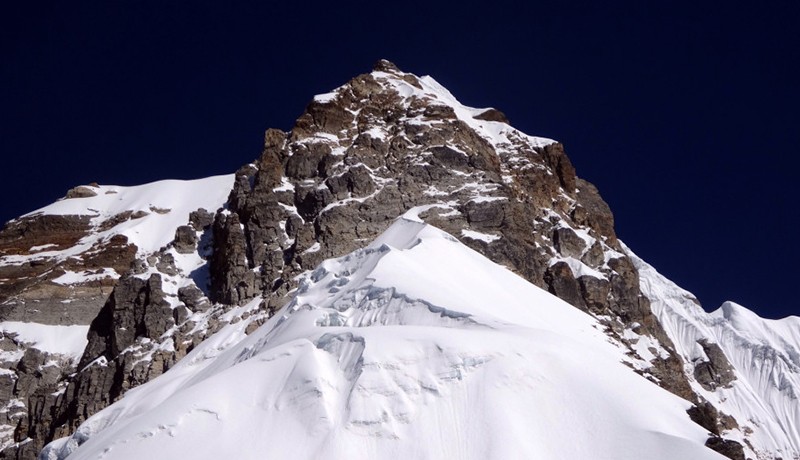 Gyalsten Peak 6,151 m is located in the Jugal Range, north east from Kathmandu Valley, Nepal. It is one of the shortest remote trekking/Climbing destinations at a distance of 145 kms from Kathmandu. There are a total of 11 Peaks (majority of them are unclimbed) of above 6,000 m in the Jugal Range and one of them being the Gyalzen Peak. The first ascent, via the south-southeast face, of Gyalzen Peak was made on 9th April, 2019 by a Nepalese Team.

The Valley was explored on 1955 by (U.K.) female mountaineering expedition team and climbed to the head of the Jugal Glacier peak-6,705m as well. And This peak was climbed subsequently by two Japanese expeditions in the early 1960s. According to local report since 1960s there were no anyone Tourist traveled.

So 9th April, 2019 is the historic moment of that valley because of 1st ascent Mt Gyalzen and even explored culture, nature by a Nepalese Team.

The trekking trail offers you a panoramic view of Phurbaghechyu 6,637 m, Jugal Yangri Peak 6,535 m, Gyalzen Peak 6,151 m, Dorje Lakpa 6,966 m, Gumba Chuli, Langpogang West 6,979 m, Bhairav Takura 6,799 m, Langtang range and Gaurishankar Range. The trek takes you through lush green fields, dense forests, winding roads, water falls, alongside the running Balefi river of Sindhupalchok district. You will trek through quaint villages untouched by the modern world. Residents of these villages comprise of people from the Tamang, Sherpa, Newar, Gurung, Brahmin and Chettri communities. This trek offers you the experience of Nature, Culture and Adventure that best befits Nepal. One can also explore the caves in Ne Pemasal 3,500 m where Guru Rinpoche (Padmasambhava) is believed to have meditated in the 8th century by the Buddhists and the locals alike. Interestingly, you can use the same base camp as the gateway to reach 6 other Peaks of above 6,000 m! And it’s really virgin place/No Crowed for Trekkers and climbers.

Day 3: Drive from Kathmandu to Kyansing

Day 7: Trek to Base Camp Gyapkharka