The Ganesh Himal trek offers you a chance to enjoy the serenity of mother nature. You can trek in the foothills of the majestic Himalayas or walk into the dense alpine forests of pine and rhododendron trees. You can also get soaked in the pristine water streams coming straight out of the snow-capped mountains.

Lord Ganesh or the elephant God is worshipped as the "God of Fortune" by Hindus all over the world. The peak of Ganesh Himal resembles the head of an elephant; hence, the name Ganesh Himal became popular. The mountain peaks of Ganesh, Ganesh II, Ganesh III, and Ganesh IV form the Ganesh Himal range.

The highest peak among them is the Ganesh I which has a height of 7429m. The Ganesh Himal region boasts of exotic flora and fauna. We trek through the forests of blue pine, oak trees, and rhododendron. The aromatic smell of the herbs in the region follows us in the trail.

Have you ever seen the sunrise from behind the snow-capped mountains and turn it golden? Have you ever drank water straight out of the mountain streams? Well, why are you still waiting? Gift yourself this trek and make memories that will last a lifetime. Here are the detailed itineraries.

Also Check: 5 Best Off the Beaten Trek in Nepal

We start our journey by traveling to Syabrubesi from Kathmandu. We drive through the scenic highway alongside the Trishuli river and overlooking the beautiful green hills and villages.the roads are quite adventurous. You can see a glimpse of Ganesh Himal on the way. We reach the Syabrubesi beside the gateway of Langtang region after a drive of 6 -7 hours.

We start our trek from Syabrubesi (4-5 hours). We follow the trail to the wear to Bahun dada pass and then to the settlement of Tamang village of Gatlang. Just above the Gatlang lies in the Parvati Kunda which attracts a lot of tourists during Janai Purnima. We can see an Excellent view of the region from the viewpoint in Parvati Kunda. A cultural show welcomes us to the village of Golijung and Gatlang. We stay overnight at Gatlang.

On day 3, we resume our trek from Gatlang (5-6 hours). The trail moves along a graveled road and then ascends through rhododendron forests to Yuri Kharka. The forest path continues till Khurpu Bhanjyang before descending to the Somdang river. Somdang River separates Rasuwa district from Dhading.

Along the way, we can see the splendid Langtang range, Ganesh Himal, Jugal Himal, Paldor peak and other mountains on the backdrop.

You can also learn the culture and heritage and tradition of Tamang people. The trail then passes through the gorgeous Chukarma waterfall. There are zinc mines that can be explored.

We leave Somdang and quite early passing through the forests and overlooking the mountain ranges of Langtang. The trek gently ascends through villages, forests, and trees farmed villages. We reach an extensive green grassland of the Pangsang pass which has a lovely viewpoint southwest of Somdang. We can see the peak of Manaslu and Ganesh Himal in the north. We set our camp at the grassland with beautiful scenery.

The Ganesh Himal region is known for their herbal flora and fauna.the area used to be a route for traders who would trade herbs in exchange for livestock and salt. The Pangsang pass has a 270-degree stunning view of the Ganesh Himal ranges, Manaslu ranges, Annapurna ranges, and other smaller peaks. We stay overnight camping in the open sky.

On day 5, the trail descends on the village of Tipling, Tipling is a large settlement with two Buddhist gompas and two church. The path then ascents towards passing through the forests of bamboo, pine, rhododendrons. We will also view some pristine waterfalls in the woods. You will see a Gomba and a cremation ground with a lot of Buddhist flags.

The most significant inhabitants of the region are Tamang people. The Tamang people have a rich heritage and culture. You can experience their Jhankri or shaman dance, which is a unique combination of Hindu and Buddhist religious practices. The Chyamara Danda and the Fyanchyat Monastery are quite the attraction in the village. You can see the lapsang Karpo, Ganesh Himal (Yangri) and Ganesh ii and iii from the town. People are generally farmers, and they make different goods made of bamboo.

After descending further and crossing the Adha Khola river, we do a climb to the villages of Shertung and Chalish. Shertung means place of gold in Tamang language. After climbing down steeply and crossing over the Gorkhen Khola suspension bridge, we do the last climb for the day of Shertung Chalish.

After breakfast, we will take 30 minutes to walk downhill to Chalish. The Chalish village is a hospitality village where Gurung people and Dalit people live together. The trek continues to Tatopani where you can take a bath in the hot springs and have lunch.

After lunch, we trek uphill to the Tamang village of Neber. From Neber you can see the Ganesh Himal in close up view. Homestays are available at the town.

You can explore the Tatopani further and relax at the hot springs. The trail then follows stone steps built by the British Gurkhas in Nepal and the Kadoorie Agri aid. They have also developed various water taps, bridges and improves trails; we pass through the tire to reach the Rachyat and Kapur villages, we arrive at the Kupchyat village after a trek of around 4-5 hours, we stay at a camp or tea house for an overnight.

After an early breakfast, we will trek to the Timla pass (3820m) after a trek of about 2 hours. You can see the Langtang range and the Annapurna range from the pass. We pass through the alpine rhododendron forests. The trail is not marked correctly so a local guide will be trekking along with you on this route.

The trail then descends on a slippery path to the Lapchat gaon. After crossing the Lapchat Khola on a box bridge, we arrive at the large town of Lapa Gaon. The Lapa Gaon is a settlement of Tamang people. The Lapa Gaon has been developing with many infrastructure developments going on. You can stay at the local houses of the Tamang people as homestays.

We start the trek by descending to the Ankhu Khola. The Ankhu Khola is a pristine small river flowing water straight from the pristine Himalayas. The trek resumes to an uphill climb of the Borang village. After having much at the Borang community, we continue our trek for Ukhum.

The trail then enters the Lishne jungle, crosses a suspension bridge and passes through the village. After a long walk of about 5-6 hours, you will reach another Tamang village of Jharlang, also called Ungul. The village is no different and offers a vast range of views of the snow capped mountains.

We trek down to the Jharlang landslide, where the crossing takes about an hour. The area sees landslides quite often, and thus the trail should be crossed with care with the help of a local guide. We resume our trek down the hill to hungry hola where we cross a suspension bridge and climb uphill to Kuri village.

There are no shops in between the villages so snacks and protein bars must be carried along with water for hydration. We pass through thick forests and pass through the village to finally arrive at our destination of Khaniyabas village. The village has a lot of tea shops and guest houses for the trekkers. You can view the breathtaking sunset view overlooking the pristine mountains in the back.

After breakfast, we trek to Thamu Khola for an hour and then climb up to the village of Kimdang for another 2 and a half hours. After having lunch at Kimdang, we trek to the top of the Megang danda. The Megang danda has a jungle right at the top of the hill, and you need to be careful because of the encounters with a wild animal. Megang danda offers the bird's eye view of the mountains for one last time before we go back to Kathmandu. We stay overnight at Megang danda.

Day 12: Trek to Trisuli Bazar and Drive to Kathmandu

We trek back to Trishuli bazar on a scenic six-hour downhill trek. We then drive towards back to Kathmandu (3-4 hours).

The best time to take the Ganesh Himal trek is the autumn season. The monsoon would have cleared by then, and views of the Himalayas would be splendid. The months of September-November is the peak time for trekking in the Ganesh Himal with clear skies and cool temperatures.

The spring months of March-May when the hills blossom with flora are also suitable for trekking the Ganesh Himal. The weather is warmer at low altitudes and cooler at high altitudes.

The Ganesh Himal trek in the central region of Nepal is located near the capital city of Kathmandu. We walk through the hills with the maximum altitude of 3842m in Pangsang la pass. We walk through the forests and water streams. The trek has a lot of ups and downs, but the path is not that difficult. The difficulty level can be said to be moderate. However, you need to be physically fit to complete the trek.

We will be providing you with 3 meals a day throughout the trek. Some of the typical food menus that you should expect are:

Note: The food item will be limited if we are at higher altitudes. Our cooking staff will serve you the best nutritious and delicious meals throughout the trek. 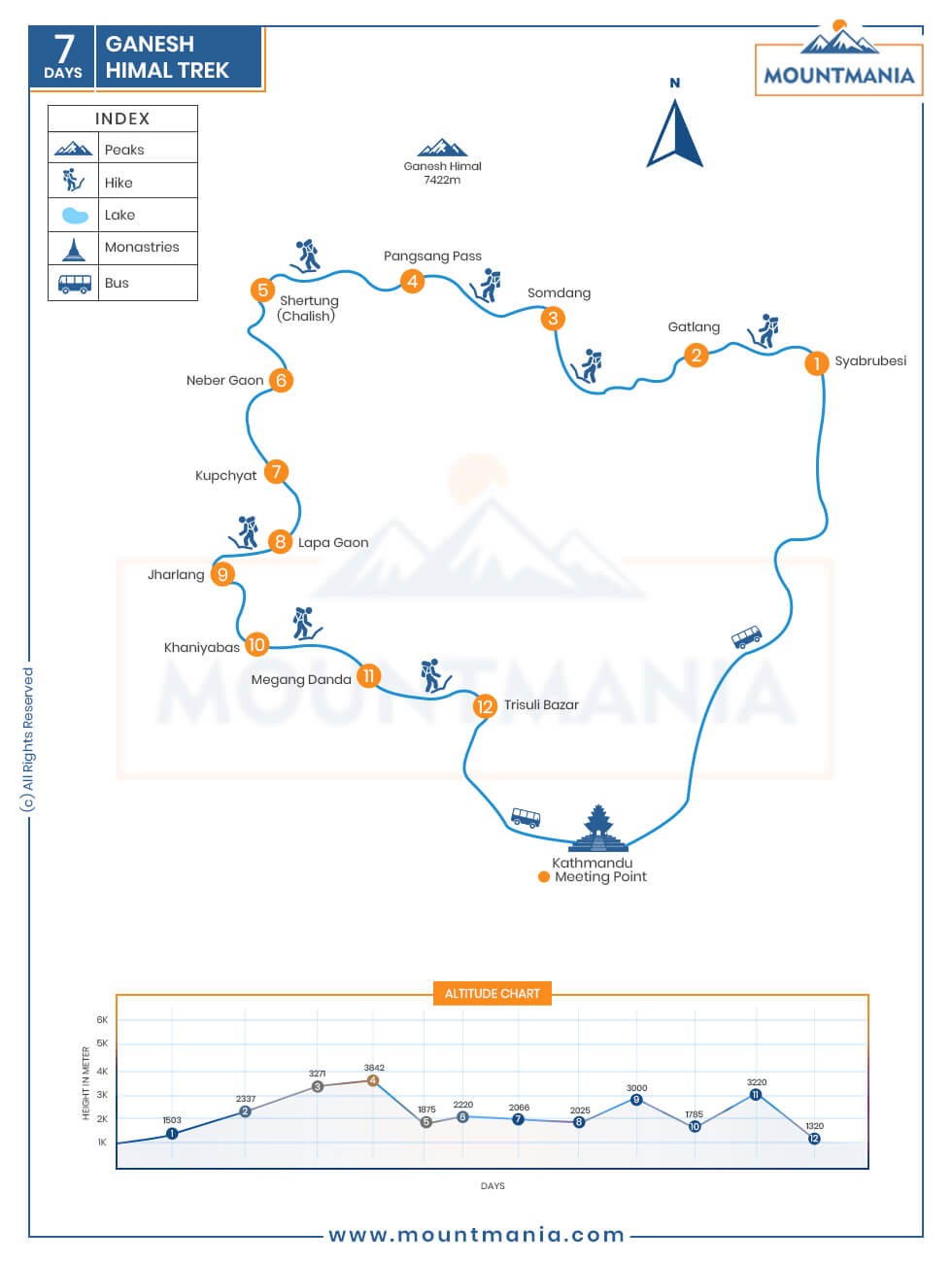