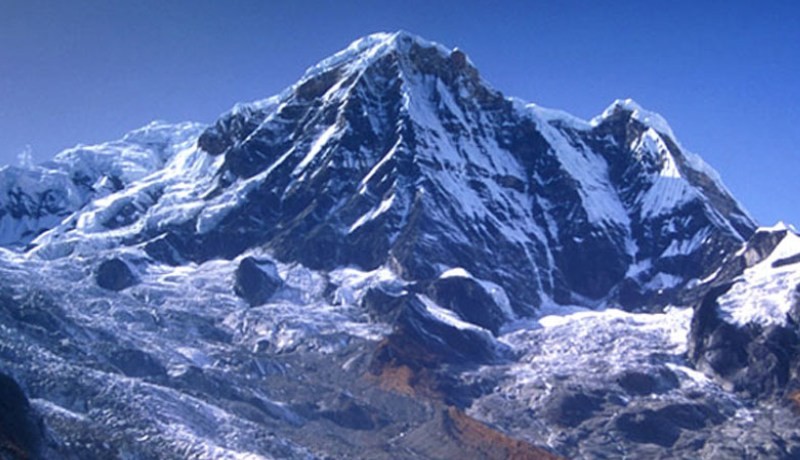 Boktoh Peak (6114m/20,060ft)  is located in one of the more remote areas of the Kanchenjungha South base camp. Boktoh trekking peak become famous in the spring of 1991 when a Slovenian expedition team climbed it as an acclimatization peak before attempting Kanchenjunga from its South East Ridge. The trekking trail to Kanchenjunga South base camp is one of the most spectacular trails that Nepal has to offer. It is a perfect objective for mountaineers looking for a challenging 6000m peak. It is suitable for those climbers who have previous 6000m climbing experience, several high passes and British hill experience. The peak is rarely climbed and permits have only been issued for climbs since 2002 under the authorization of the Nepal Mountaineering Association (NMA). Before then the peak was issued permits under the Department of Tourism. This route was opened to trekkers in 1988, though people have trekked in the area on mountaineering expeditions since the turn of the century.

The semi-technical nature of Boktoh also known as Bokta to the locals is a deceivingly complex peak that calls for skills in route finding. The Boktoh trekking route is shared with the approach to the wild Mt. Kanchenjunga. Continuing on the caravan trail past Bokta peak would bring you to Kanchenjunga’s South base camp. The Kanchenjunga region is quite special, it is more remote so it has fewer trekkers that pass through. Bokta climbing offers fantastic views of the Himalayas, from the summit you can see: Mt. Kanchenjunga (8586m/28,169ft), Kumbhakarna (7710m/25,595ft) Dhormo Peak (6850m/22,473ft).

Mount Mania always focuses on safety, comfort and an enjoyable climbing experience for our clients.Mount Mania has a unique strategy that optimizes acclimatization and allows clients to have more energy for the Bokta Peak climbing period.Mount Mania always issues experienced, government licensed climbing Sherpa guides. Our climbing schedules and programs are designed by experienced climbing guides and Sirdars. You can rest assured that our staff will only allow you to climb peaks in safet and secure conditions. The most promising route is via the col to the North of the mountain. From a high camp at the Col, the route follows the snow slope under the right shoulder to the summit. While the slope is moderately steep, the route has exposure to rock fall.There is an icefall to access the final 400m of the route, from the col on its North side just above the icefall, along nave shoulder