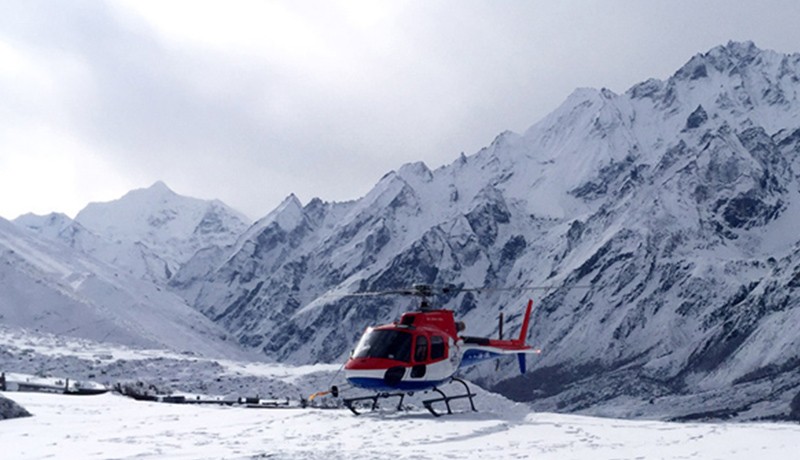 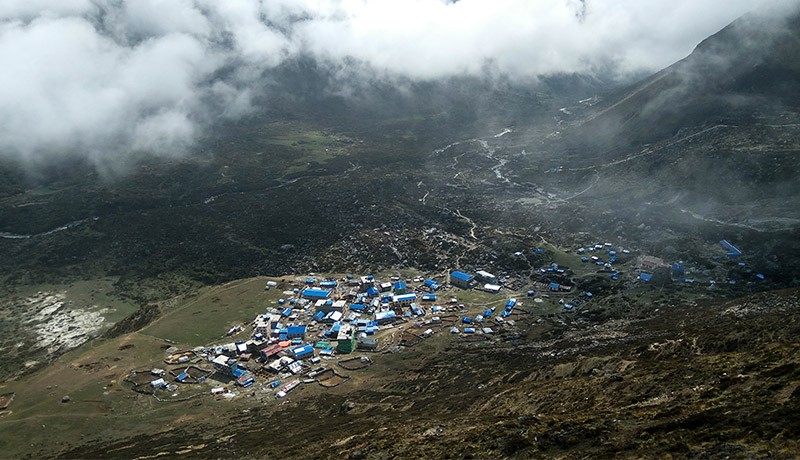 A hidden valley beside the beige Tibetan plateaus and surrounded by icy peaks in panorama, Langtang Valley offers spectacular views of the Himalayas namely Ganesh Himal, Yala peak and Langtang Lirung. After the Annapurna and Everest region, Langtang is one of the popular destinations amongst travelers visiting Nepal.

Langtang is home to many sacred lakes amongst which Gosaikunda is the most popular one. Situated at an altitude of 4300m, the glistening blue alpine lake of Gosaikunda is a holy symbol. Hindu mythology explains Gosaikunda as the abode of sacred deities Shiva and Gauri.

Locals say that Lord Shiva created the lake by injecting his Trishul into the mountain to extract local water to cool his throat after drinking poison. Due to its religious beliefs, the lake witnesses thousands of pilgrims and devotees during the Janai Purnima festival.

This Langtang Gosaikunda Helicopter tour is one of the most beautiful helicopter trips. It allows you to witness the incredible closeup view of mountains, verdant landscapes, and the glacial lake of Gosaikunda.

The aerial journey takes you through the landscapes of Langtang National Park into Kyanjin Gompa. Kyanjin Gompa is a Tibetan-culture influenced diverse settlement. Flying alongside the magnificent icy peaks of Ganesh Himal and Langtang Lirung, the trip concludes with a brief pause at the sacred lake of Gosaikunda and then back to the capital.

The Langtang Gosaikunda Helicopter Tour is an excellent alternative for people looking for a short, scenic and affordable experience. Though quick and cheaper than most helicopter tours, it promises to provide you with spectacular views in absolute luxury! So, what are you waiting for? Sign up for this helicopter tour for an experience of a lifetime!

The journey commences from Kathmandu’s Airport, from where you will be catching an early morning flight to begin the journey. Make sure to carry your passports and necessary permits for checking in.

The flight takes off exiting the verdant valley of Kathmandu and heading north towards Langtang. We pass through diverse settlements of Kutumsang, Ghopte, and Laurebinayak eventually into Gosaikunda.

After spending some quality time indulging in the glazing beauty of the frozen lake, the journey further extends towards Langtang where you will visit Kyanjin Gompa. Kyanjin Gompa is a Tibetan culture influenced settlements up in the valley. You will also visit the ancient Kyanjing Gompa monastery and a government-owned cheese factory.

The trip successfully comes to an end after a wholesome breakfast after which you will be heading back to the capital.

The total tour time will be about three hours and a breathtaking one. You get to witness exquisite views of the surrounding mountain range, steep moraines and abundant greenery of oak maples, pines, and rhododendrons forests.

7:00 AM - Our representatives will transport you from your hotel to the domestic terminal of TIA, Kathmandu.

7:30 AM - After completing all the Check-in procedures, wait in the terminal for the final call to board the helicopter.

8:00 AM - The flight takes off from TIA as it exits the valley of Kathmandu and follows the hills towards the north towards Langtang.

8:30 AM - After a few minutes of flight time, the flight lands at Gosaikunda. You have one hour of grounding time at which you can explore around Gosaikunda and offer your players to the sacred site. After some well-deserved photographs and quality time, we head towards Kyanjin Gompa. The total time taken to travel from Kathmandu to Gosainkunda by helicopter is about 15-20 minutes.

9:00 AM - You land at Kyanjiin Gompa where you can visit the ancient Kyanjin Gompa Monastery and the local cheese factory. You also get to observe the Buddhism influenced unique settlements of people. After a wholesome breakfast, you board back into the chopper and further continue the journey.

10:15 AM - The trip concludes as you touchdown in TIA, where our representatives will escort you back to your hotel.

Though you can opt for the trip throughout the year, there are some favorable seasons for the journey. The winds are much calmer, temperatures more suitable and the view much more rewarding!

The best seasons to take this Langtang Gosaikunda Helicopter Tour are the autumn and spring seasons. February, March, April, May, Mid-June, September, October, and December are the ideal months. But, these can differ according to weather changes.