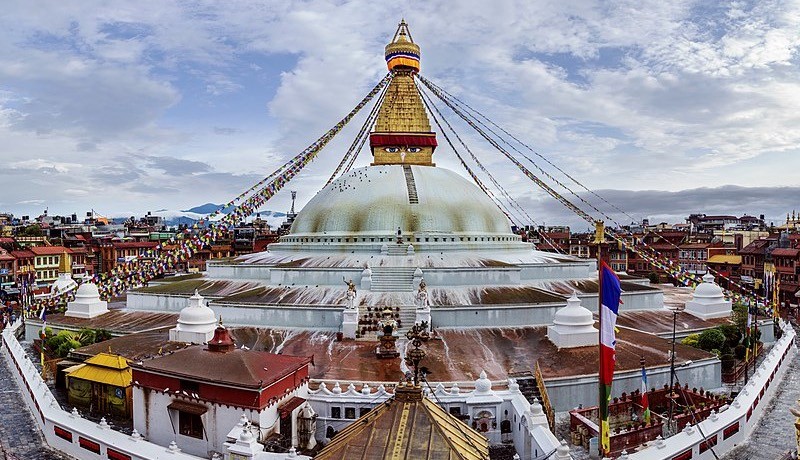 Located in the Northeastern part of Kathmandu, Boudhanath stupa is the world's largest stupa. This stupa is the main center in Kathmandu valley for Tibetan Buddhist worship. Pilgrims travel all the way from the Himalayas, Tibet, Southeast, and East Asia to worship here, and to view this monastery which has made it a major destination for pilgrims.

Founded by the Nepalese Lichchhavi King Shivadeva into the reign of King Mahendra through other Nepalese chronicles date. In the late 15th or early 16th century, the bones of King Amshuvarma were discovered here according to some sources. While other sources claim that the site was made by a prince seeking forgiveness for killing his own father. However, the one most people believe is the tale of the poor old woman and her sons.

According to legends, a mother named Jadzima who looked after her chickens built the stupa. She is believed to have been very poor. Although she was poor, she wanted to build the stupa very much, hence, she asked the King of Nepal for permission. Now, the King did not usually give out permission but somehow, maybe because of her karma, the words "Okay, it can be done" slipped out of the King's mouth.  Hence the stupa is often referred to "Jarung Kashor Chörten" by the Tibetans. Jarung meaning "it can be done,'' kashor translating into "slipped out of the mouth" and Chörten being stupa.

While the mother did take up the initial building of the stupa, she passed after the dome-like structure, the vase was completed. The rest of the stupa was completed by her four sons. After the completion of the stupa, the sons stood in front of the stupa and prayed to it. It is believed that everyone received one wish per person. It is said that while they were praying all the bodhisattvas and buddhas were incorporated into the stupa, hence, why its name is also "All-encompassing". As a matter of fact, it is believed that the stupa is so powerful that anyone who wishes for something while praying will get what they want. Whatever you pray for when you first see the stupa will be fulfilled.

A Brazilian nun knew this story so she prayed to be able to build monasteries when she first saw the stupa. It is believed that her wish had been fulfilled and when she went back to her home, she made plans which she was able to fulfill. There are many other myths that surround Boudhanath Stupa such as this.

The oldest brother is said to have made a wish, praying to be the Dharma king of Tibet, the snow land. The next brother hearing his brother's prayer wished to be a minister to help his older brother to spread the Dharma. The next one wished to be an abbot to pass on the lineage of ordinations in Tibet and finally, the youngest one wished to become a powerful yogi in order to fight against the obstacles that may arise while spreading Dharma in Tibet.

It is believed that in their next life, the oldest became Songtsen Gampo, the Dharma king in Tibet. The Dharma king had two princesses who are believed to have brought with them the statue of Shakyamuni Buddha. One statue is in Ramoche while the other is in Jokhang. The king did activities that benefitted all sensate beings and he is also believed to have helped build Jokhang. The second oldest is said to have become Padma Gungtsen, a prime minister in Tibet while the third became a Shantarakshita (abbot). The fourth is said to have become Padmasambhava.

While building the first monastery in Samye, Central Tibet, the spirits would tear the building during the night while humans built it during the day. Believing that Padmasambhava would be able to help them, one minister suggested it to the king. Padmasambhava is said to have manifested as a deity called "Controlling the Three Realms". The deity made the spirits pledge to protect the monastery by subduing them and making them Dharma protectors. The spirits stayed around him on the mountain in Tibet to protect the Dharma there.

Hence, this is why Mahayana Buddhism has prevailed and preserved in Tibet for so long and why so many people have been said to have become enlightened. Many believe that Tibetan Mahayana Buddhism has spread all over the world because of this. Tens of thousands of people are able to find happiness and peace and seek enlightenment even in the West.

When Tibetan king Songtsen Gampo converted to Buddhism after 600 AD, the first stupa at Boudhanath was built. When comparing the grace and purity, other stupas of Nepal are incomparable to Boudhanath with gilded towers painted with all-seeing eyes of Buddha and its dazzling whitewashed dome. To make the most of your visit you can join the Tibetan pilgrims for their evening and morning koras. The current stupa is a reconstruction as the previous one was destroyed in the 14th century by Mughal invaders.

The construction serves as a three-dimensional reminder of Buddha's enlightenment. The Khumba represents water, the Harmika represents fire, the spire is air, the umbrella at the top is space and the plinth is earth. To achieve Nirvana, a human must pass through 13 stages which are represented by 13 levels of the spire.

While originally stupas were built to hold holy relics there are claims that Boudhanath contains the relics of Kashyapa and past Buddhas. Others claim that a bone from Siddhartha Gautama's skeleton is kept there. There are 108 small images of Dhyana Buddha Amitabha around the base of the stupa. 108 is actually a lucky number in the Tibetan culture. 147 niches set in groups of four or five create a ring of prayer wheels.

There is a small gateway at the stupa's North end which leads into the upper step of the plinth. The gateway is next to a shrine dedicated to the goddess of smallpox, Hariti. From 5 am to 6 pm you are allowed to go into the plinth which offers a raised view over the area.

The entry fee for foreigners is Rs 400 while for the SAARC countries Rs 100.